The science behind ‘Magic: The Gathering’

Magic: The Gathering (MTG) is a funny trading card game inspired by fantasy role-playing games. MTG emulates a combat between players’ creatures, where not only their strength matters but also their abilities. Everything revolves around magic, which is present in the form of enchantments, artifacts, sorceries and many other exciting spells. There is a huge variety of creatures (and other spells) with which to compose your deck, roughly organized in five colors:

Uncolored and multi-colored cards also exist. And cats, many kinds of cats. The catalog is really huge, continually expanding since 1993 and can be consulted on Gatherer, the MTG card database. 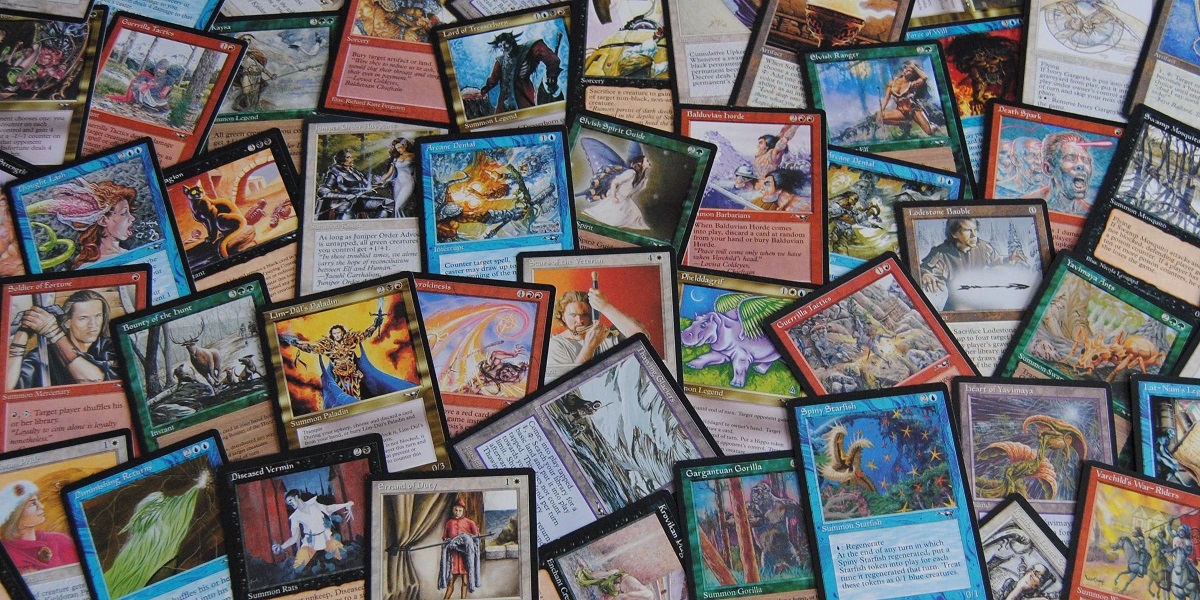 MTG, however, has a steep learning curve that makes it hard to understand at first. The complexity of its rules may be discouraging (each card has its own instructions!) and, to top it off, it’s often considered a game for nerds. If, despite that, you want to learn how to play, I recommend the computer version, MTG Arena, which is freemium, fully playable and has an excellent tutorial.

But let’s take it step by step. Turing machines, proposed by the mathematician Alan Turing in 1936, are a class of automata able to take a program, run that program and show some result. A Turing machine is made up by four components:

In the article that can be found here, a Turing machine is represented in a very original way as a business card. This business card has a hole in the center (the tape scanner) through which only one symbol written on the tape can be seen. The states of the tape scanner are represented by the four possible ways of orienting the card on the tape. Each orientation allows a different instruction table to be properly interpreted.

Image extracted from ‘A Business Card Universal Turing Machine’ by A. R. Smith.

Whatever way it is represented, this is how it works: the machine positions its tape scanner over a square on the tape and reads the symbol written on it. Then, based on the symbol read and the state of the tape scanner, the machine looks in the instruction table for

If the process has not halted, the tape scanner reads the current square and so on.

This website illustrates step by step how some Turing machines compute simple operations between numbers. For example, they use a 2-symbol, 17-state machine to solve products of two integers represented by the unary numeral system (in which 5 is 11111). Solving 3 x 4 requires 261 steps! Not so cool, considering that you have to count the twelve 1s to know the result.

To prove that a programming language, device or system is Turing-complete all you have to do is to show that it can be used to implement a universal Turing machine (UTM). That is, that it can simulate the behavior of any other Turing machine.

In general, a system that has a control flow that allows conditionals and loops, and has something that works as a memory is usually Turing-complete. All general-purpose programming languages such as C, Python or Java are Turing-complete. But accidentally, there are other systems that are also Turing-complete if you force them a little. This is the case of the zero-person game of life, the videogames Minecraft and Cities: Skylines, and even Microsoft Office PowerPoint, to mention a few.

In the following XKCD comic strip, the starring sticksman creates a UTM only with rows of stones.

A bunch of rocks, by XKCD.

Churchill et al. embed the Rogozhin UTM(2, 18) in MTG. How they achieve this is very complex and requires a fairly high level of knowledge of MTG mechanics, but some key points are as follows.

The following video explains the whole process in more detail:

In a normal game you cannot arbitrarily play the cards you want. Indeed, you must prepare a deck of 60 cards and randomly draw a starting hand of 7 cards. However, Churchill et al. propose in their paper a sequence of cards to start with that is very unlikely to appear randomly in an initial hand. There are other weaknesses, such as all the time and space it would take to manually run the Turing machine with the MTG cards.

The exercise of embedding a universal Turing machine in Magic: The Gathering is a very original theoretical work (that I admire) but, from my point of view, it’s hardly transferable in a real game.