How NOT to win the lottery

‘The Devil’s Dictionary’, a satirical dictionary written by the American journalist Ambrose Bierce and published in 1911, defines lottery as ‘a tax on people who are bad at math.’ The origin of this observation clearly lies in the fact that winning the main prize of any lottery has really low odds, and only those who have done the math will realize that winning the jackpot is practically impossible. Therefore, those who play the lottery are paying a ‘voluntary’ tax because they will never see any return on their investment.

Indeed, let’s take EuroMillions, which is played jointly in nine European countries. To win the jackpot it is necessary to match 5 numbers out of 50 and 2 numbers out of 12. This makes the probability of success 1 in 139,838,160. According to an Irish insurance company, the odds of being struck by lightning in a year are 1 in 1,222,000. Although I suppose it also depends on how much it rains in your region, the odds of being struck by lightning are 114 times greater than winning the EuroMillions!

From a more local point of view, let’s take the Spanish Bonoloto. The mechanism is similar to EuroMillions but simpler: it consists of matching 6 numbers out of 49, which makes the probability of winning only 1 in 13,983,816. However, last month, on January 28th, something astonishing happened: the number of winners rocketed to ten! The draw was no different than any other, in the sense that there was no special prize and the participation was not higher than on other days. So what happened? To find it out, let’s take a look at the winning combination:

Interestingly, except for 1, the numbers follow an arithmetic progression with a difference of 11. But the most eye-catching thing is that the combination looks like this on the betting slip:

It’s a diagonal line! 10 out of the 5.1 million people who participated in the draw that day decided to sketch a diagonal line on their betting slip! Isn’t it funny? Being original made them unoriginal. And so they had to split the jackpot between all of them, €67,000 each.

I wonder how many other people participate in the lottery with bursts of originality like this. Lines of all kinds, little clusters, smiley faces, geometric shapes… as you can see below, there are endless possibilities! 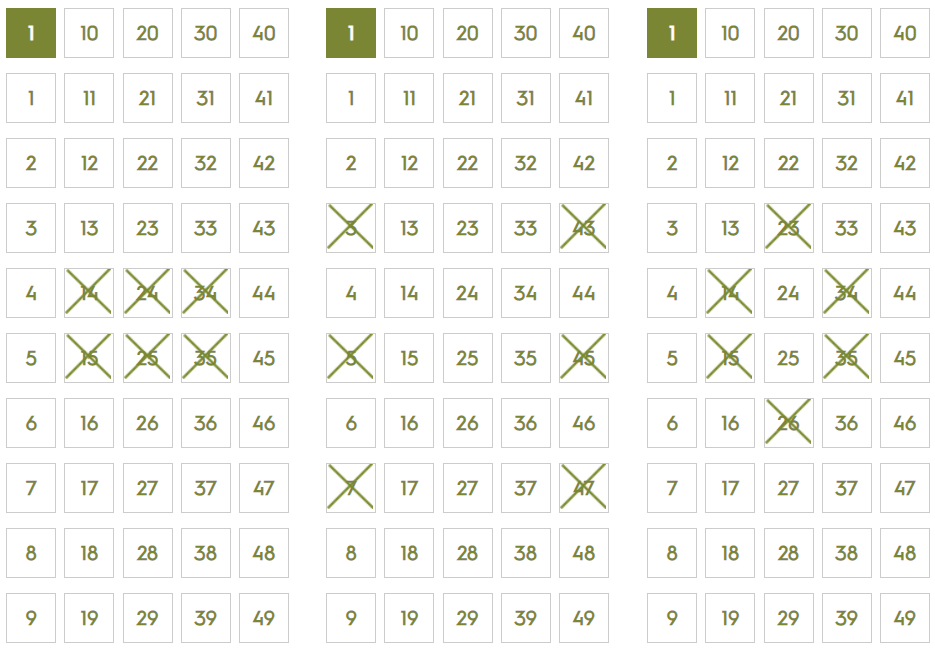 Moral of the story: to be unique, be as random as possible!